This wedding. THIS WEDDING. oh my days if Carlsberg made weddings, they’d be this wedding. It was an absolute dream – mega cool couple who I could hang out with for days, two epic venues (The Asylum Chapel and Brunswick House) and a gaggle of guests who know how to party hard. It was a dream come true. Keep scrolling to find out what Lou and Nick’s epic Asylum Chapel wedding in London was like.

How did you first meet and what was the proposal like?

We met at university in Farnham, Surrey. Nick studied a degree in Fine Art Louise studied a BA in Journalism Friends and fellow housemates, set about dropping hints there might be a certain something. One drink led to another one night in October (20/10/2005), they hit it off.
Fast forward 7 years, and Nick, proposed to Louise over a bowl of butternut squash soup at home. The rest is history!

How did you get started with your Asylum Chapel wedding planning?

Things changed from small humble ideas too quickly being swept away with the whirlwind of wedding planning. We started with a small catchment area in mind, south London. And knew we wanted to get married in somewhere that truly reflected us. Asylum Chapel at Caroline Gardens was immediately on our wish list. But, even (what we thought was) far enough in advance we weren’t successful with our date. Back to the drawing board. After searching for venues high and low, we went back to Asylum on the off-chance that our wedding date had magically become available. It had! We were in luck. Now to find a reception venue.

This is where things got a little tougher. We mentioned humble beginnings, well we had our hearts set on a relaxed pub setting with good food, great beer in a homely environment. Turns out that was pretty hard to come by. Especially in London, in close proximity to the ceremony venue. We were conscious of commuting across London, losing valuable party time to travelling. It was then that we came across Brunswick House.

We’d seen it previously but for some reason had struck it off the list. But we were seeing it with new eyes. It seemed to be worth checking out. We took a day trip to visit the house one Saturday when it was open to the public, and were immediately taken by its charm. Stuffed full of eclectic paraphernalia (open antique house where everything’s for sale), this old Georgian town house was perfect! Three floors of jam-packed character and unique spaces to spend our wedding day in. We’d found the bases for our day. Now to add the special touches!

Why did you choose The Asylum Chapel for your Wedding?

We chose to have our wedding ceremony at the Asylum Chapel. The most charming battered-out old shell. It’s got such a distinct patina lending itself to an atmosphere that was bang on. On the day, the sun shining through the stained glass was just magic. Beautifully distressed and abundantly atmospheric, why wouldn’t we choose it?

We chose Brunswick House for our reception: This large Georgian house is steeped in history and grandeur but also has a relaxed homely quality that we were looking for. It felt a befitting space, special enough for a wedding with its interesting and eclectic environment (a patchwork of bits and pieces from all eras) which had a similarly beaten-up/worn-in quality. It also offered an interesting, inventive seasonal menu served from the connecting restaurant. Finally, the cellar rooms at Brunswick House were the hidden gem. A vaulted undercroft which provided the sort of cloistered setting we were after for the party. The different nooks allowed guests to involve themselves in the mix of things on the dance floor or break away for some chill time.

What did you both wear? Why did you choose those outfits?

What sort of theme did you go for with decor and styling?

Relaxed, autumnal, playful. We didn’t really have a theme, it was just an attitude that we want to bring to the day. An atmosphere.
We wanted to stay clear of trite cliches like the plague 😉
The invitations were a springboard for a few design touches throughout the day, tho ugh. The same colours continued through to design the table plan, patterns used on one of the cakes, and the lanyards we had instead of place names.
Flowers by Edie Rose: As orange was a key colour, we wanted this to feature in the bouquets and displays. From the celosia to an abundance of physalis, offset by sage tones predominately brought by eucalyptus. The autumnal array of flowers both captured peoples attention due to the vivid colour but also their fragrance. Louise’s bouquet was everything she wanted, adding that orangey splash of colour to her outfit. Bunches of eucalyptus tied to chairs in the isles, big display features in the chapel at Asylum. These were transported to Brunswick and used to decorate the reception. Centrepieces were made up of a selection of similar flowers to the bouquets a s well as pumpkins of all shapes, sizes and tones.

Beautiful (if we do say so ourselves). There’s no lighting in the chapel, other than candles, so we were heavily reliant on the natural light pouring in the through the stained glass. Lucky for us, we were greeted with a sunny autumnal day. With a warmth in the air, and the sun pouring in to the chapel it was filled with a gorgeous hue.

It felt very special to be in a place so full of history and character. We fell in love with the venue immediately, and as we previously mentioned it almost didn’t happen for us. Being able to get married in such a stunning place was incredible. Walking into the chapel was such an uplifting, awesome experience. Our wedding song was Flee by Mechatok, and despite the name it’s so incredibly euphoric. Everything went blurry except for Nick and it was a real moment. Walking towards him, eyes fixed. I’ll never forget it.

The speeches were also very special. Nick found our friend, Tamala’s speech such a surprising yet special touch. I’d asked Tamala to read Bob Marley’s poem ‘He’s Not Perfect.’ Despite the name, the words mean a lot to me and I really want to do some thing for Nick on the day. “Because perfect guys don’t exist, but there’s always one guy that is perfect for you.” It says everything in such a beautifully simplistic way. I asked Tamala as we have been friends for as long as I’ve known Nick – 13 years. My course mate at uni and Nick’s house mate in halls, she was an instigator in bringing us together and I’m so very thankful for that.

Secondly, our friend Jude read ‘Union’ by Robert Fulghum. Having read through a lot of readings and been present at many weddings it was hard to pick one that truly represented us. But the words of this reading really rung true for us. And there was no better person than Jude.
Other touches that really set things off for us were the bubbles instead of confetti, we weren’t sure if this would work but it did and was so fun! The registrar, Ricardo, was an absolute star and really helped to set the tone: not too serious, fun yet special. And that was important! Balloons, the bouquet toss! The jazzy sax and guitar was also so great! We wanted this element and our talented friend David (Jude’s partner) made this happen for us. So thankful! There were countless things!

What was your plan for the reception?

Delicious food. Good wine. Laughter. Fun. Dancing. More drinks. What more could we want?
The food was much needed after a number of glasses of Prosecco and some super tasty gin cocktails. Sitting down at the head table and drinking in the setting was pretty opulent yet comfortable. There’s a sense of being at home at Brunswick, having all your friends and family over for an extra special occasion. That was the kind of feels we were hoping for.
When time came for the speeches, there were a few nerves. Up first was me, followed by Nick, my sister (best woman), my Dad and then the best man. Doing a speech was important to me, as was it to ask my sister if she wanted to say a few words. Fuck tradition.

When it came to planning what we wanted for the party, music was big on the agenda. From the music at the ceremony, to the evening’s music – there was a certain feel w e wanted to bring with the music we chose. When we were planning the party, we asked each other what would be the best case scenario music-wise. Having been to many a sweaty Hipsters Don’t Dance (HDD) set, they were top of our lists. But wedding DJs, they aren’t. On a wing and prayer, we ping them an email and to our surprise they were in. A simple request, tun up and play our favourite music. The dark cavernous cellar rooms of Brunswick were made for this night, an amazing sweaty night was just what we’d hope for. Nick’s shirt was drenched and we didn’t stop dancing. The BEST night EVER.

What was your first dance song and why?

Aaliyah – One in a Million.
Nick: “Because she really is one in a million” Slow, sultry R&B flavours nailed the brief!

What is your advice to other couples getting married? What would you do differently?

Advice: Stay true to who you are as a couple. Don’t be swayed by wedding cliches. Don’t feel as though you have to make compromises you won’t be happy with. Enjoy it. The planning and the day itself go by so quickly, so drink it all in.
Do differently? Nothing. That would compromise how in love with the day we are.

Frighteningly easy. Like an old friend. Or an adopted adult child.
A woman who knows her shit, is fucking talented and a joy. Thanks for documenting the day and being there to the bitter end. Love a gal who can party hard. 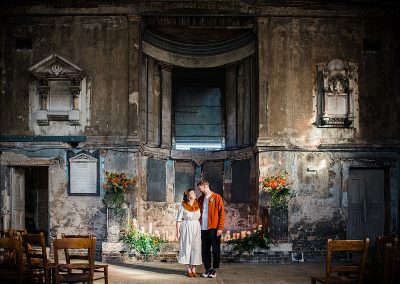 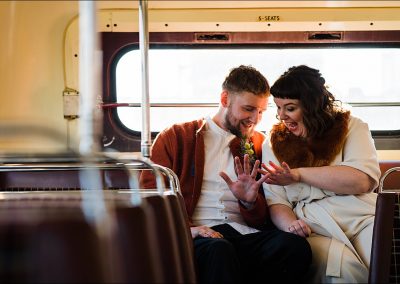 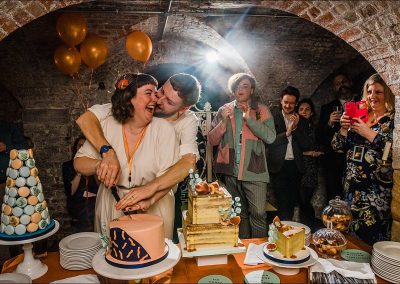 Fancy seeing more weddings like this? Check these out: